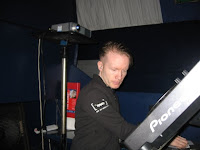 This was a great night when I got to play at least an hour more than scheduled to cover gaps. The CD players were surprisingly flaky but the sound was great. As the Ill FM room was located by the entrance anyone coming into the place was exposed to the Ill FM virus. The extra time meant that even more innocent kids on their way to the dubstep room got probably their first (and only?) exposure to industrial, power electronics, gabber, Slovak minimal techno and more. I was exhausted by the end, but spurred on by the dedicated legion of the damned urging me on. The SCH track was played twice... but I didn't hear any complaints! Thanks to Tamon for inviting me.