A new mix produced in the dying days of full lockdown and the first days of post-lockdown.

An atmospheric, exorcistic mix featuring music released under, acquired under or thematically relevant to the shadow of the pandemic. From industrial to Italian library music, from sound art to electronica, from techno to Gaelic psalm singing. From here to eternity. In the hope of better times.
Posted by a.m. at Friday, July 24, 2020 No comments:

There’s always a lag between the completion of an album and its release. Sometimes this can lead to uncanny resonances with events. Ethical Governor’s “payload” dropped just as the Coronavirus crisis escalated and the resultant shockwave began to hit the “global economy”. Even if the release itself weren’t knowingly dystopian, the context in which it is appeared certainly was. Listeners to darker strands of techno and other genres with a bleak worldview will know that sonic dystopias can sometimes be oddly uplifting. Whether this effect holds true throughout 2020 is an open question and how much appetite there’ll be for darkness in the aftermath of what’s to come is an open question.

Meanwhile, Ethical Governor (Tony McMurray) has aimed to to transmit “a story of dystopian mayhem” that’s already becoming overshadowed by real stories of dystopian mayhem. I’d assumed the name was sarcastic but it had a precedent several years ago in this video which ironically argued for government by drone:

Interestingly, this album doesn’t feel like a cartoonish doom fest or an unreflective wallowing in others’ misery (bearing in mind of course the difference between being able to make or dance to techno about such grim scenarios and being at their mercy). The artwork features a military drone of the type constantly in the air over conflict zones. Of course, drone warfare is hardly “news” now, it’s a banal, routine part of 21st century life. Work like this can no longer function as a warning. It might function as an awareness raiser, but only as a brief explosion on the grainy screen of our infosphere.  Sound artists have already documented the sounds of military drones and made compositions from them so incorporating such dystopian military-political reality into techno is not so provocative. It’s a path Vatican Shadow and others been following for some time and which Black Lung has followed faithfully for more than a quarter of a century.

This is a moment when the virus is presented as a side-effect of a proxy war between America and China and governments openly debate what proportions of their populations “should” be allowed to become infected or to die. Catastrophe is (literally) in the air now in a way that makes the supposedly clinical techniques of drone warfare seem quaint. All of which means that right now, a dystopian-themed release is unlikely to be able to match reality as we gaze into the abyss on our phones. 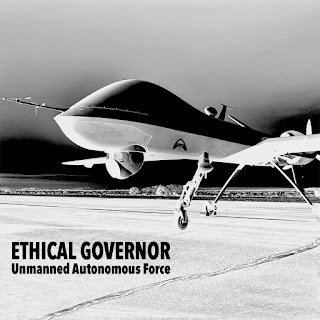 Having said that, Unmanned Autonomous Force is - to coin a phrase - well-targeted and slightly clinical, rather than gratuitously spectacular. “Ethical Governor” sets the scene with an edgy, nervous soundscape that feels both like a nagging reminder and an ominous promise. “Active Shooter” next escalates into a dance floor track with a strong trace of Belgian hardcore techno. The overall effect is to suggest dancing on the edge of an abyss, which is precisely what thousands did week in, week out (until the clubs began to close due to the coronavirus).

Slower tracks such as “Decomp Floater” are the most menacing and memorable here. It takes its time in building an atmosphere of mechanical menace, haunted by strange cries. From here there’s an abrupt acceleration to “Invasive Species” - a lean, mean dance floor track populated with machinic/alien chatter.

Sometimes the scenarios the tracks may be depicting are hinted at obliquely but in other cases the intention is clearer. Either way, the tracks are effective springboards for the dystopian imagination (for those who still wish to indulge this tendency even now). The sinisterly looping “Do You See” is evocative and menacing, yet oddly pensive, almost an invitation to reflect.

While this might have seemed like a natural ominous closer, the album actually concludes jarringly with “Final Age”. This is a much tenser and faster dance floor payload delivered on target. The message (if there is one) could almost be taken as keep on partying while the world burns (if you can find a club that’s open). There are worse ways to go. 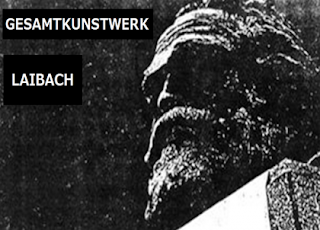 I'll be playing a selection of rare, live and obscure Laibach plus a few classics at this special book launch event at Iklectik.

Last stand on the Stubnitz

I had the honour of closing the first night of Primal Uproar III on the MS Stubnitz. Playing to the last band of survivors of a long, hot night, following a storming Skat Injector set, I began with acidic and hard techno before veering into old favourites. 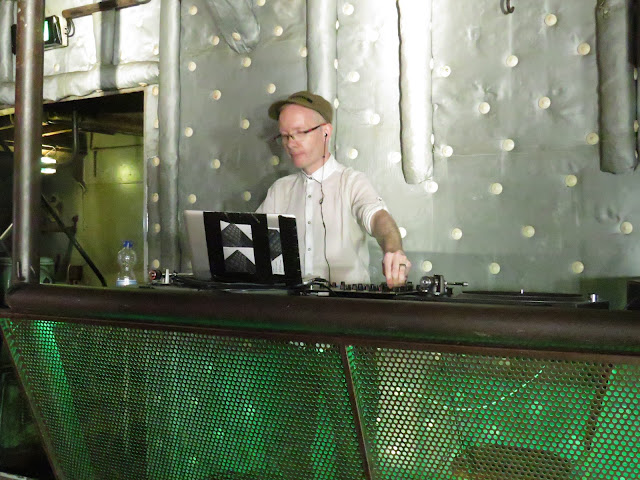 New Frames We Go Public by Way of the Net (Hands)

Another Alias Heave (White of My Eyes) 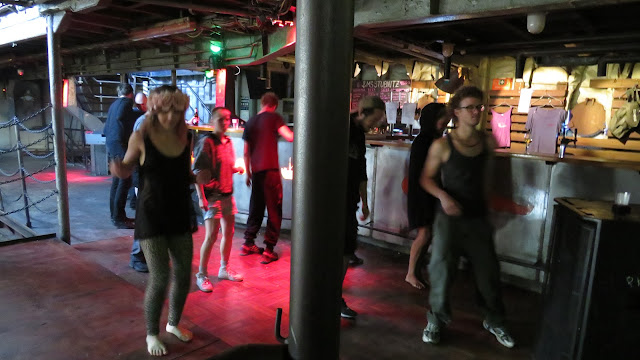 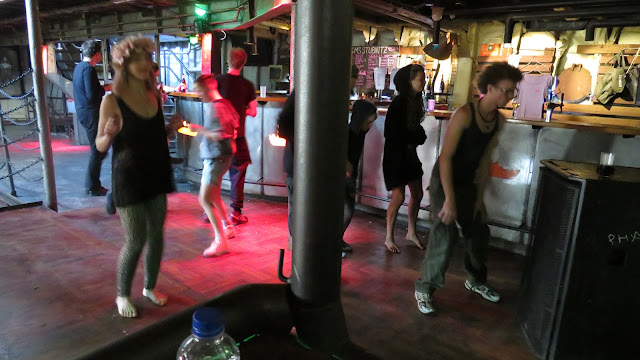 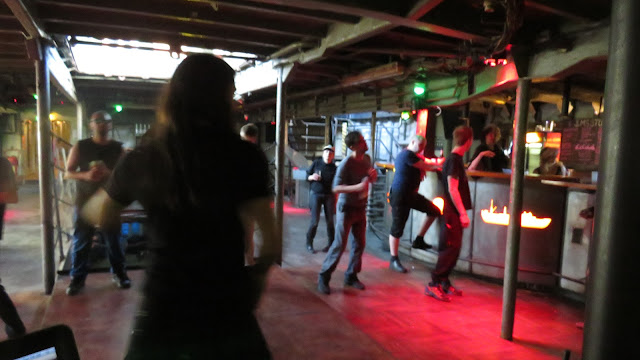 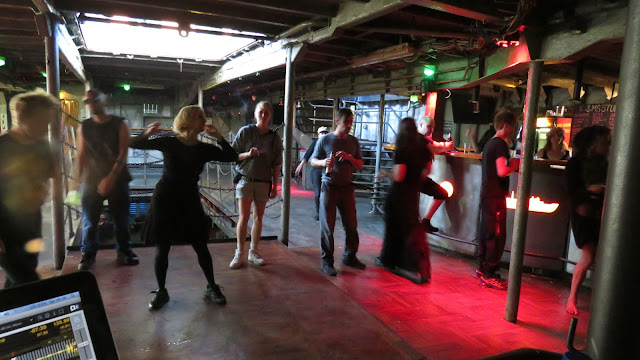 
This is a special limited edition red vinyl release from the Barcelona artist 30drop, to mark its second anniversary. There aren’t many techno artists who explicitly discuss the social and cultural context of their work, or who so clearly emphasise the conceptual aspects of their work,  but this is intrinsic to the way 30drop operates as an artist and as a label. Although the title doesn’t illustrate it, this unreleased track and remix still bear traces of the cosmic techno tropes in its previous work.

’Unusual Extremes’ opens with a brief percussive impact, then runs straight into a quite sinister and subtly icy sequence that comes to haunt the track. If this does represent some sort of cosmic journey, it’s a colder one than many Detroit artists would offer. Detroit may be an influeunce, but there are only frozen, intensely filtered traces of Detroitian harmonic warmth and optimism and the track works all the better as a result.


The Black Dog Remix has a tougher start, rapidly creating a very serious and intense atmosphere. The main innovations the Sheffield duo bring to bear are an uncanny, morphing drone, minimalistic acid sweeps and some subtly sharpened percussion. The result is a forceful and compelling remix that takes the original further into the uncharted territory it was assigned to explore.

This is the second vinyl release on the new Italian label Substrato and a sign of the health and innovation of the Italian scene generally. The mountain-themed artwork and geological aspect of the label concept continue a vein of spatial, conceptual, Italian techno already apparent in the work of Giorgio Gigli and others. Buck is the alias of Substrato owner Alessandro Stefanio, who also records as OL-047 and Slick Station.

The title of the opening 'Ambient Progression' isn't an accurate indicator of what's to come. It's cavernous and relentless from the start, techno on a grand, panoramic scale. It's less than seven minutes, but due to its use of deceleration and acceleration and textural variation, it feels lengthier, in the best sense. At one point an industrialised Moroderesque sequence comes to the fore and in the final section a stricter and more minimalistic mood asserts itself. Its only fault is that it casts a long shadow that the following tracks can't quite escape from.

'Atmo 003' is slower and more introspective. Its coldly futuristic atmosphere brings to mind the work of the legendary Vapourspace project from two decades previously.

The beats drop away for 'On Board', which is a more beatific ambient piece. Symphonic chords and layered, processed voices are used to create an atmospheric soundscape.

Dutch duo Artefakt shift the mood again with an optimistic, uptempo remix of 'On Board', which initially discards the ambient wash of the original in favour of a bassline-driven linear agenda. As it proceeds the ambience of the original is gradually brought back in and finally re-asserts itself.


This short, powerful and minimal release is a split between the two aliases of Madrid's Manuel Anós; Psyk and Maan. It's released on his own Non Series label, which has also recently released Tadeo's impressive Chronicles of the Future album.


Psyk opens the EP with 'Origin', which features sustained, rising synth chords and a bleepy pattern that slowly modulates. It's a minimal framework marked out by sparse but rich elements that glides frictionlessly to a sudden dead stop.

Maan's track 'Loops' reveals the subtle differences between the producer's two aliases. It slides straight in and operates at full effect from the start. It's a model of total efficiency, gradually augmented by effective Phuture-style handclaps. Compared to the two Psyk tracks it has a deeper, more minimal, bass pulse and sits between them well.

Finally, Psyk's 'Wire', a tightly-coiled track on which everything comes together from the start. It's a clean, intense, elegantly filtered track. Based around a cycling,  modulating main sequence, it gradually evolves and decays to impresssive effect, bringing to mind Robert Hood's Minimal Nation era work and closing this all-too-brief release in fine style.